Water access, demand, usage and management become complex due to the crossing of multiple boundaries: political, social and jurisdictional, as well as physical, ecological and biogeochemical. The complexity of many water issues lie in the interconnections and feedbacks among variables, processes, actors and institutions operating in the knowledge and political communities. Consequently, many water management issues become contingent due to the dynamic changes that occur in the knowledge and political communities as well as the interactions and feedback that operate within and between these two communities.

The Water Diplomacy Framework (WDF) is emerging as an alternative to traditional techno- or values-focused approaches to water management. The WDF is an approach that diagnoses water problems, identifies intervention points, and proposes sustainable resolutions that incorporate diverse viewpoints and uncertainty as well as changing and competing needs and demands. As such, WDF rests upon diverse forms of contextual inquiry of and intervention in resolving complex water problems, with mutual gains negotiation functioning as the fulcrum of diagnosis and intervention. 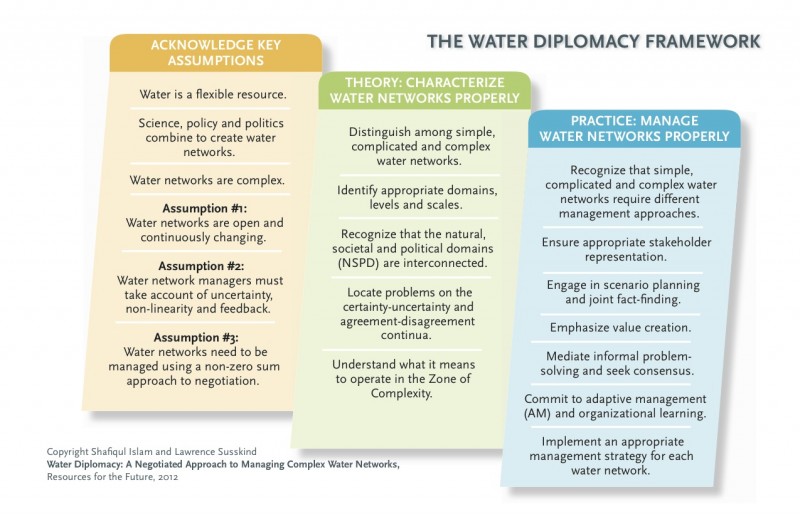 Beginning in September, in each of these Insight posts, we – Elizabeth Cooper, Yasmin Zaerpoor, Shafiqul Islam and Lawrence Susskind – will focus on one thematic idea and use water cases to show how this idea is manifested in practice and how can we use the lens of complexity science and negotiation theory to move from the universe of possible solutions to actionable resolutions for effective water management. Each post will unite theoretical ideas (through a bibliography of additional resources), and practical examples that show the relevance and implications of the post’s theme in a real world case study.

The first piece, published on September 1st, will focus on the interdependence and interconnectedness of aspects related to drought and water shortage in California – from urban users in large cities, to the rural users who are competing directly with agriculture to access water in shared aquifers, as the extended drought continues to limit the quantity of available water and impact the quality of water.

After each Insight piece is posted to this blog, we’ll share other relevant examples via our Twitter, Facebook, or LinkedIn accounts to exemplify and highlight the implications of these ideas and solicit your feedback on how “practice” can inform to revise and refine “theory” of WDF. We hope you will actively engage in this conversation by sharing theoretical ideas and tools as well as practical examples you found insightful to resolve complex water problems.

1. Exploring the interconnections and interdependencies at play in California’s water problem (September 1, 2015)

2. Coping with uncertainty and feedback in the Nile Basin (October 6, 2015)

5. Where Complexity and Uncertainty Prevail, Joint Fact-Finding May Provide a Way Forward (September 1, 2017)

Yasmin Zaerpoor is a PhD candidate in the Environmental Policy and Planning group in MIT’s Department of Urban Studies and Planning (DUSP).

Where Complexity and Uncertainty Prevail, Joint Fact-Finding May Provide a Way Forward