“Hitherto the long range forecaster has been denied a seat in the banquet hall of science; …the general scientist has denounced him; the professional weather man has treated him with supercilious scorn” (Richards 1911). This statement was made over 100 years ago – long before the development of computers and numerical forecast models – when weather forecasters were limited to reading maps.

Fast forward to now: the age of supercomputers, smart phones and social media. Despite significant advances in our understanding of the atmospheric dynamics, hydrologic processes, and the ability to solve complex equations and communicate with millions of people at lightning fast speed, the same debate rages within the scientific and practicing community as water professionals attempt to push the frontiers of early warning systems for water related hazards. 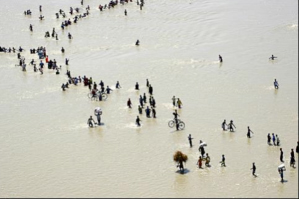 What is happening with our early warning systems? Where is the bottleneck?

Water related hazards are inevitable. Floods and drought have been with us from the beginning of time. Whether water related hazards turn into disasters or not depends on the severity of the hazard and vulnerability of the institutions and infrastructures to effectively respond to such hazards.

On August 18, 2008, the Koshi river – originating from the Tibetan Plateau of China, traveling though Nepal, entering Bihar, India and finally ending at the Ganges – changed its course and picked up a path it had abandoned over a century ago. 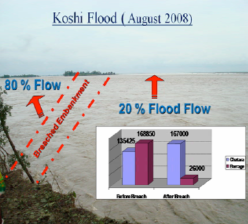 When the Koshi breached the left embankment, about 80% of the flow passed through the 1.7 km breached section. The death toll would have been higher if the breach had happened during the day time. Image from (Baral 2009)

More than one hundred people were washed away. Three million people were affected during the weeks in which large regions of Nepal and India were submerged. On that day, the Koshi river was flowing at 168,000 ft3/sec, less than 20% of the historical maximum flow observed in 1968 – 913,000 ft3/sec.

What happened? Could a flood forecasting system have prevented this somewhat tame natural hazard from becoming a disaster?

Most likely not. The 2008 Koshi flood was not caused by extreme precipitation. Consequently, even a perfect precipitation and flood warning service could not have prevented this somewhat average flood hazard to become a full-blown disaster. This flood was primarily caused by a breach in an embankment where 80% of the flow escaped the river and flooded  surrounding areas. In this case, what was lacking is not a scientifically reliable flood forecasting system but an effective early warning system that can integrate four elements ranging from risk knowledge, such as the potential risk of embankment failure, to response capabilities.

Over the years, the second element of effective warning systems – monitoring and warning services, particularly those focusing on technological solutions – have received the most attention and resources. Yet, our experiences from  Hurricane Katrina or the 2010 Pakistan floods have shown that high quality forecasting of a hazard is not sufficient to achieve actionable outcomes that will reduce losses and impacts.

We need to breach this bottleneck – resulting from our skewed emphasis on finding the perfect technological fix for flood forecasting – by integrating processes, people, and politics in an effective early warning system.

To develop and implement such an effective early warning system that will synergistically integrate and sustain these four elements, it is essential to have strong political commitment and develop durable institutional capacities. Our efforts in Bihar, India and Islamabad, Pakistan provide tangible examples of how we are beginning to build durable institutions and capacities that can integrate global best practices with contextual knowledge to create actionable outcomes.