From IWRM back to integrated water resources management

Integrated Water Resources Management has become the must-do in the water management world.  But it is not always the best approach to solving our water problems and can even cause harm and divert energy from more promising alternatives.

The basic ideas of integrated water resources management are nearing 100 years of age. They are a call to consider water holistically, to manage it across sectors, and to ensure wide participation in decision making. In essence they are a call to stop fragmentary approaches to water management and high handed development decisions made for the good of a single industry or faction.

While there is nothing wrong with these ideas — in fact they are good, they have been pushed forward and formalized as what has become Integrated Water Resources Management (IWRM). IWRM has in turn taken on a life of its own. Following ideas of the 1992 Dublin conference, IWRM it is now often interpreted to consist of specific conditions (establish a water policy and law which uses the basin as the scale of management, create water rights, use water pricing in allocation, and include participation in decision making). Despite a general lack of evidence that the approach has delivered, it has been uncritically promoted, especially in developing countries and often with donor support. In some cases attempts to implement IWRM have caused real damage. In others, IWRM has been justified as an end in itself rather than a means to solve specific challenges, thereby diverting resources from more practical problems and sometimes undermining alternative, functioning systems. In yet others the IWRM brand is being used as a tool to mask other agendas. And perhaps worst of all, the focus on IWRM has shut out alternative thinking on pragmatic ways to improve water management. 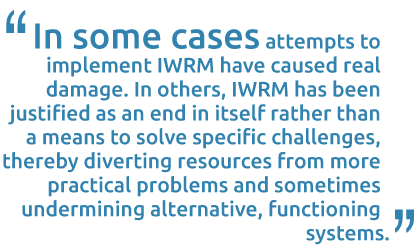 Some examples will explain.

Two decades ago, water policy reform based on the principles of IWRM were attempted in Sri Lanka as a donor financed program. The reform process culminated with a draft water policy and law that included the standard IWRM conditions mentioned above including the reorganization of water administration based on river basin organizations and transferable water rights. The outcome was justified through participation of key stakeholders in more than 100 meetings. But as news of policy came out, protesters led by various political groups and non-governmental organizations claimed that the policy was move to privatize Sri Lanka’s water resources, that the process was not really transparent, that cultural views about the value of water were ignored, and that the entire exercise was done only to satisfy donor demands. The government backtracked and withdrew the policy. But the sour taste meant that the topic of water reform was difficult to bring forward for 20 years and Sri Lanka still lacks a water policy or coordinated strategy as shown in efforts to manage recent drought and floods. There is finally some agreement on a way forward, but even so current efforts by a major donor to further the process are put within a project focused on dam safety. The IWRM process not only was not useful, it set real reform back through the manner in which its implementation was attempted.

In many other developing countries, IWRM has become an end in itself rather than a means. In Ghana for instance, the Water Resource Commission highlights that its mandate is to, “…assist and guide the Government to achieve the goals of IWRM and monitor its achievements.” Rather than focusing on specific problems, the Commission must focus on achieving IWRM, whatever that may mean. The Government of Ethiopia’s Water Resources Management Policy plans to establish river basin councils as, in its words,  “one of the main instruments to implement integrated water resources management which is actually the pillar of the policy …” Focusing on implementing IWRM of course diverts attention from existing problems. But it can also cause harm. Efforts to formally implement IWRM in Africa typically neglect the existing, and functioning, informal land and water rights on which much African agriculture is based. In Ethiopia,  the zeal to move forward with IWRM meant that the millions of dollars and countless hours preparing thoughtful water master plans for the country were to be pushed aside, because they did not count as part of the IWRM process called for by a donor.

In yet other cases, IWRM has been hijacked to mask other problems and agendas. In one Central Asian country, the IWRM approach has been put forward as a great success for improving management, in part because it allows wide participation in water decisions. But in that same country, farmers are not allowed to choose the crops they grow and may lose their land if they disobey government planting orders. Participation in water decisions is highlighted. Lack of freedom in basic farm decision making is ignored. In another country in the same region, a donor wants the government to separate irrigation management and regulatory responsibilities. This may be a good way to improve irrigation outcomes. However, to achieve the goal, the approach being used is to include the proposed changes within a program and project geared at implementing IWRM, negating the participation ideal.

You might have trouble finding storied such as these documented in the literature, but ask any practitioner in the developing world, and you will hear many more.

So if Integrated Water Resources Management is not the answer and what can we do instead? For one thing, we must not believe that the common components of IWRM are the only options.

You can ignore the basin. While the rhetoric of IWRM is freely used in Central Asia as mentioned above, the basin approach has gotten nowhere in solving issues between the region’s riparian states. However, smaller efforts to improve management of some small tributaries and canals that cross international boundaries have shown success. This should not be surprising. If we look at the hundreds of successful treaties signed to manage international waters around the world, we will find very few which take a basin scale approach.

You can also ignore pricing. In Gujarat State in western India, heavily-subsidized electricity to the agricultural sector has led to aquifer depletion, a nearly bankrupt electrical industry and poor rural power supplies. The typical IWRM inspired solution was to price electricity and groundwater at cost. But those giving such advice failed to understand Indian politics, the advice was never implemented (the Government even turned down large loans for implementation) and the situation only worsened. An alternative approach which largely ignored pricing and instead championed intelligent subsidies along with separation of power lines for farm and non-farming uses and other changes was tried. Because the approach was pragmatic and grounded in the reality of the Indian system, it was actually implemented. The result was reduced overdraft and electricity loss and uninterrupted power to farmers during their limited critical growing period. Not perfect, but an implemented improvement. The Jyotigram (Village of Light) program is now being rolled out in other states.

You can, in fact, ignore any of the tenants of Integrated Water Resources Management – or you can pick and choose from them if they suit the circumstances.

The bottom line is that we all already know how complex water is and that it should ideally be managed holistically, considering efficiently, equitably and the environment. But we should also know by now that holistic management is costly and politically difficult. We don’t need to continue financing the implementation of buzz words to work on real world water problems. Doing so diverts attention from real issues, frequently results in unintended negative consequences, and risks having an agenda hijacked for other purposes. Water creates complex problems that require context specific solutions rather than strict formulas, best practices and toolboxes. We need to put the problems first and then work to find pragmatic solutions, whether they use IWRM principles or not.

For an additional perspective on this topic (and response to Mark Giordano’s original presentation) you may want to read “Cease-Fire on IWRM” by  Dr. Danka Thalmeinerova and Steven Downey on the GWP blog.

Mark Giordano is currently the leader of the International Water Management Institute’s Water and Society division. He is moving this summer to Georgetown University’s Walsh School of Foreign Service.