Jayanta Bandyopadhyay on March 25, 2014 in Opinions

With a large and growing population, high poverty rates, and a need to ensure food security, water is highly politicized. The diverse opinions and resulting disputes between South Asian countries regarding shared waters has resulted in few strategies for basin level cooperation in the face of changing requirements and variable water quantities. In addition to irrigation (the main consumer of water), the region is also trying to promote urbanization and economic growth, both of which significantly add to the total water requirements. 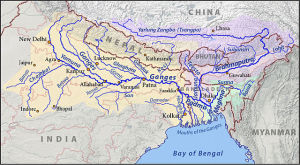 Traditionally the main sources of water used in South Asia have been the rivers originating from the Himalaya (Brahmaputra, Ganges and Indus). The snow and ice melt from the Himalaya contribute significantly to these rivers. The Himalaya region is known as the Third Pole of the Earth because only the north and south pole have more ice storage. Water from these trans-boundary Himalayan rivers are subject to disputes between countries, provinces, and even neighboring land owners. Traditional diplomatic processes have been stagnant for decades, and even initiatives pushed by The World Bank, like the Abu Dhabi Dialogue, have not brought much advancement. Will we see escalation of the traditional conflicts? Or are there wise new options for cooperation and poverty alleviation without intensifying political and environmental instability? The future of Ganges-Brahmaputra-Meghna (GBM) basin depends on the breaking of the water diplomatic logjam in South Asia.

Home to about 750 million people, the GBM basin drains significant parts of both the South and North aspects of the Himalaya. The Ganges sub-basin has the highest population density in the world and related challenges. While the GBM waters in Tibet have important water supply and hydropower potential implications for China; the area, population, and dependence on these waters in South Asia has created more pressing concerns related to quantitative sharing and cooperative management in the basin.

In India, the GBM basin accounts for about 60 percent of the total potential flows of all the rivers. While the total run off and precipitation provide ample flow, the domination of the summer monsoon and non-uniform distribution create more challenges for managing flood risks, and meeting water demand year round. The eastern part of the basin (Meghalaya Hills) the averages precipitation of about 11,600 mm per year; but, at the western extremity of the basin, in Rajasthan, the annual precipitation may go down to a low of 200 millimeters. This is further complicated by the fact that about 80 percent of the annual precipitation is concentrated during the summer monsoon (July to September).

Moderating this quantitative picture of high spatial and temporal unevenness in the natural distribution of precipitation to come closer to the growing and changing patterns of needs and demands, has so far been the driving force for water engineering in South Asia. Following independence in 1947, and pushed by the need for food security, irrigation projects received very high priority in governmental policy;  India’s irrigation potential has increased from 20 to 110 million hectares. More recently, a large number of hydro-power projects on the Himalayan rivers have been built (or are planned) on tributaries to meet the power requirements of industry and the growing urban areas.

Another objective of water engineering in the GBM basin has been the moderation of the impacts of monsoon high flows, generally termed as flood control measures. Through the construction of storage dams and embankments, engineering interventions and large financial investments have been made with the objective of restricting the spread of the rivers during the monsoon. However, the reductionist tradition of water engineering of initial British origin continued after independence in South Asia. Moreover, availability of whatever  research on the science of the Himalayan rivers has  been done, has remained quite restricted . The engineered approaches to addressing flood and storage did not take the complex ecological character of these rivers into account; and, furthermore, engineering education and research had limited insight into the unique hydrology and ecology of these rivers.

In addition to ecological knowledge, new institutional and legal frameworks also remain underdeveloped. Because of this stagnancy in developing, sharing, and designing interventions based upon a strong knowledge base the typicality of the monsoon precipitation pattern, the ecological complexity of the Himalayan rivers and the huge population pressure in the region, South Asia is one of the most challenging parts of the world in terms of the potential use of  water diplomacy, which includes a diplomatic intervention in the conceptual framework of traditional water engineering.  systems engineering and diplomacy. 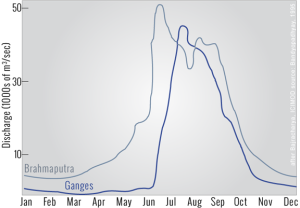 The cumulative impacts of temporal inequity of preciptation due to the Monsoon are reflected in the hydrograph of the rivers Brahmaputra and Ganges.

With the rapidly growing water requirements in South Asia, particularly in India, comprehensive and new water systems science and diplomacy can bring the much needed balance among the multifaceted demands on the Himalayan waters to ensure that human interventions do not trigger ecological un-sustainability and they have a general acceptance from the people concerned, especially those affected negatively by the interventions made, like involuntarily displaced.

Over the past decade, many have opined the need for a more comprehensive and inter-disciplinary approach to water systems research and engineering interventions in the Himalayan rivers, with a need for new knowledge and innovations in several directions. These directions constitute the background for a new water diplomacy in South Asia. Policy and water engineering must take ecological knowledge into account, and we need to adjust institutional structures and economic considerations to support wise management and useful interventions. Particularly, the issues of ecological conceptualization will be considered because this has been neglected in the search for a new approach to South Asian waters, including the Track 2 diplomatic process, while the economic and institutional components are equally important, continued neglect of the ecological understanding and resultant detrimental impacts would hamper any attempts at progress.

This post is the first of a two-part post. The next post, Water Diplomacy for South Asia: Conceptualization of Ecological Water Engineering, outlines priorities and actions for a water diplomacy approach for sustainable and adaptable water security engineering measures for this basin.

Prof. Jayanta Bandyopadhyay’s research spanning a 35+ year career has been guided by the objective of generating trans-disciplinary public interest knowledge on critical issues related to the natural environment. He was a Coordinating Lead Author in the global report of the Millennium Ecosystem Assessment and an expert reviewer for the Inter-governmental Panel on Climate Change for climate change and water. He established the Centre for Development and Environment Policy at the Indian Institute of Management Calcutta, retiring in 2012. He has been the President of the Indian Society for Ecological Economics (2006-8) and a Fellow of the India-China Institute in The New School, New York. He is an adviser to the Water Diplomacy Program at Tufts University, Medford, USA.