Few places illustrate the importance of the water-energy nexus better than northern China’s Yellow River basin.  Acute water scarcity, driven mainly by dramatic economic growth, is increasingly confronting policymakers with hard choices about how to provide water for existing uses as well as rapidly expanding energy production.  Under these conditions, the institutions that decide who gets how much water in northern China become increasingly important.

The water-energy nexus poses special problems for water resource allocation because the region is home to China’s major coal-producing regions, especially Inner Mongolia and Shanxi provinces.  Coal production is highly water-intensive, especially for processing, and rapidly increasing demand has led to an increase in mining and combustion in areas that are already very water scarce.  All told, coal consumes about 4 trillion gallons each year. In addition, the Chinese government hopes to increase water-intensive shale gas production in northern China, exacerbating the problem of water scarcity. 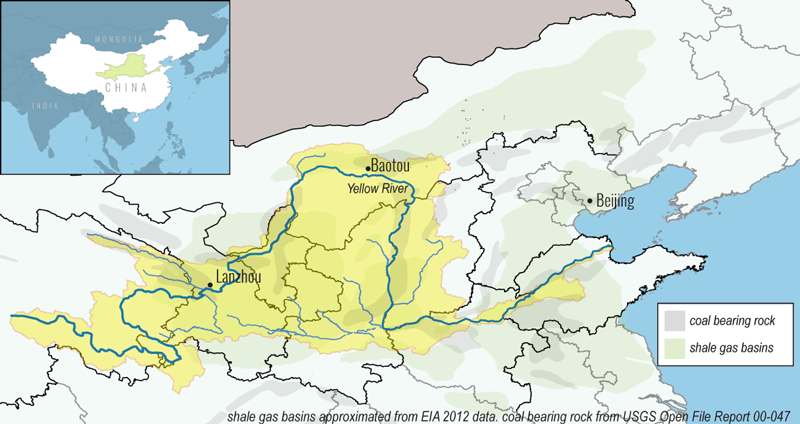 The Yellow River flows through several provinces and its water is used for cities, industry, and agriculture. The basin’s water challenges are also linked to energy: significant coal and shale gas reserves lie within the basin.

China’s major institution responsible for dealing with water allocation in the north is the Yellow River Conservancy Commission (YRCC).  Although only one of several water conservancy commissions covering China’s major river basins, the YRCC is uniquely powerful and important.  In fact, it predates the current government, having been originally established in the 1930s under the Nationalist government.

Today, the YRCC reports directly to the Ministry of Water Resources (MWR) in Beijing, and is responsible for a wide range of planning and policy coordination activities.  It prepares basin-wide development plans and develops flood control, irrigation, and major infrastructure development strategies in the nine provinces and autonomous regions which share the Yellow River basin.  However, despite its name, the YRCC is a commission in name only—its members are bureaucrats rather than representatives of different agencies or regions.

In theory, the YRCC is supposed to supervise and coordinate water use in all the regions under its jurisdiction.  Most notably, it oversees a plan for allocating the Yellow’s waters to each province.   However, in reality many local officials simply ignore their allocations, or find ways to conceal their actual water use.  In many cases, enterprises fail to apply for new water use licenses, instead relying on groundwater which because of hydrological inter-connectivity ends up depleting surface waters as well.

Indeed, tensions between central and local levels of government represent one of the biggest challenges to responding to water scarcity in the Yellow River basin.  For example, an Asian Development Bank report blamed the “overwhelming protectionism exercised by local governments” for the Yellow River’s ecological and water quality problems. Such political conflict continues to hamper water resource management and allocation, is likely to only increase as the pressures on the Yellow River’s waters grows.

So far, the Chinese government has attempted to respond to these challenges by improving its supervision of local governments.  A massive effort known as the “Digital Yellow River” aims to install near-real-time flow monitoring stations along much of the length of the river to better monitor provincial water use, for example.  Regulations have also been progressively strengthened.  But ultimately, it’s unclear whether these efforts will succeed in addressing the political conflict which has so far impeded responses to the water-energy nexus in the Yellow River basin.

There are several steps the government can take to prevent political conflict from undermining attempts to address water management challenges.  These include better stakeholder involvement, steps to facilitate negotiation and build consensus, and actions that would accelerate the setup of water rights trading systems and promote marked-based mechanisms that prevent protectionist jurisdictional bureaucracies from hindering implementation of the national policies at the local level.  Ultimately, meeting the challenges of the water-energy nexus in the Yellow River basin will require these kinds of reforms.

Scott Moore is a joint Giorgio Ruffolo Postdoctoral Research Fellow in the Sustainability Science Program in and the Energy Technology Innovation Policy research group at the Harvard Kennedy School of Government. His research focuses on international environmental politics and policy, with a topical focus on water resources, energy and climate change and marine issues, with a regional focus on China and India.

Planning for water or for development? Hydro-centric or hydro-supportive approaches to food, energy and water security

Coping with Uncertainty and Feedback in the Nile Basin