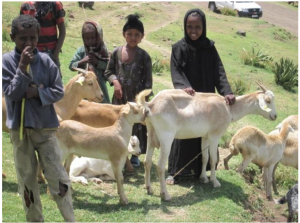 The types of technology transfer varied between the programs, ranging from technological devices to improve irrigation or monitoring to knowledge transfer programs, such as a program to demonstrate and promote drought resistant livestock and crops.  Here, children exhibit goats their family obtained through the CwDCC program. (UNDP ALM Report, 2012)

Stepping back from the politically-charged rhetoric of the negotiations, we recently published a paper in Nature Climate Change titled “Technology Transfer for Adaptation”.  In it, we looked at technologies being transferred through the Global Environment Facility’s (GEF) adaptation funds.  Through both a content analysis of project proposals and case studies of three projects funded by the GEF, we analyzed trends in terms of the way technology is conceptualized and incorporated into the projects, and barriers for technology transfer and adoption from the perspective of different stakeholders.

The 66 projects included in our analysis span the globe, with the largest portion in Africa. The case studies, from Colombia (agriculture, water supply), Peru (water supply), and Ethiopia (agriculture) varied in design and scope. Our paper discusses technology selection, market factories and technology diffusion in these three projects. 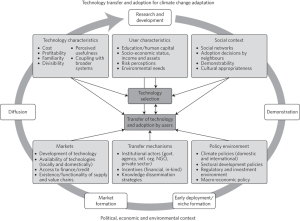 Technology Transfer and Adoption for Climate Change Adaptation
Many factors are important for technology selection, transfer and adoption by users. Researchers used this model as a framework for analyzing “which types of technology are being transferred for adaptation and where these transfers fit into the innovation process.”
(from Biagini et al 2014)

We found that significantly more technology transfer is occurring through adaptation projects than the pessimistic rhetoric might suggest, although the scale of these projects is quite small.  Projects tended to focus on demonstration and early deployment/niche formation activities.

Laura Kuhl is a doctoral candidate at the Fletcher School of Law and Diplomacy and a fellow in the Water Diplomacy program. Her research looks at innovation and technology transfer for climate adaptation in East Africa and Central America.