This year marked the 25th anniversary of the World Water Week organized by the Stockholm International Water Institute (SIWI) in Sweden. The event lived up to its past reputation as a key event for gathering water practitioners, scientists, global experts, financiers, diplomats and politicians from around the world. From transboundary water perspective, this year also saw a heightened focus on shared water resources, water security against growing scarcity and access to clean water as a fundamental human right. A striking conversation on transboundary water management took place in several sessions including water diplomacy; aquifers as transboundary water resources; and implementation of international water laws.

Throughout the event, session speakers pronounced the call for urgent action: with the world’s 276 transboundary river basins accounting for 60% of freshwater flows and 40% of the world’s population living in these basins – the emphasis was rightly placed on making cooperative strides to meet the growing uncertainties and associated challenges. The conversations at the Water Week also raised some sobering facts – with global water demand expected to rise by 55 percent, 4 billion people will be living in severely water stressed basins by 2050. Inaction will only increase future water risk exposures. 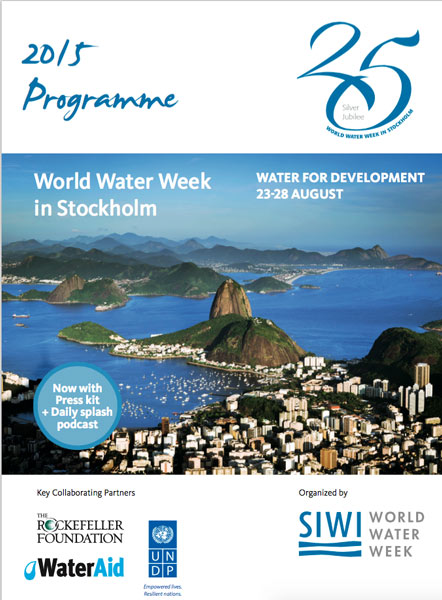 The World Water Week called upon governments, politicians, scientists and civil society equally to ensure that water agenda is adequately put forth at the coming climate negotiations through COP21 in December this year with SIWI Executive Director, Torgny Holmgren going on to state that “climate change is water change”. The transboundary water governance agenda was explored in a number of ways at this year’s World Water Week. The speakers and presenters provided insights from experiences around the world on the complexities of global governance challenges associated with border crossing water.

Water Diplomacy Professor Shafiqul Islam highlighted that transboundary waters are both a source of conflict and a chance for cooperation when we reframe the complex water challenges. The prospects of global water diplomacy as a contribution to peace building and regional integration can be realized if complex water problems are seen as non-zero sum solutions – through value creation and mutual gains negotiations. He proposed “principled pragmatism” as an approach that deploys analysis, numbers and models together with processes, narratives and meanings to resolve complex water problems. Dr. Marian Neal of SIWI International Center for Water Cooperation (ICWC) presented the cycles and spirals of justice in water allocation decision making. She highlighted that justice at one level can result in injustices at another. Inclusivity in water diplomacy is the key and issue of scale needs to be the foremost consideration for opening up the dialogue to stakeholders at all levels. Dr. Patrick Huntjens from The Hague Institution of Global Justice stressed that it is critical to design context specific arrangements. He elaborated that fundamentals of decision making and planning should include conflict resolution by negotiation, open attitude to new technologies and innovations, and the high degree of participation in voluntary mass organizations.

An important topic discussed at the World Water Week related to the post-2015 agenda and the Sustainable Development Goals (SDGs), particularly inclusion of transboundary water cooperation in the SDGs. Target 6.5 states “by 2030 implement integrated water resources management at all levels, and through transboundary cooperation as appropriate”. Several speakers weighed in on the SDGs and transboundary water resources management. Dr. Francesco Sindico from University of Strathclyde highlighted recent developments in international water law that apply to transboundary aquifers and groundwater. He pointed that formal and non-formal efforts to manage and regulate transboundary aquifers have begun ranging from rigorous scheme implementation, to more general cooperative regimes and even development of specific instruments for exchange of scientific data. Similarly, Professor Owen McIntyre from University College Cork linked international water law as legal frameworks for meeting political commitments that are the SDGs. He stated that SDGs are a pronouncement of universal (political) commitment of States to progressive values. International water law provides the essential legal and institutional framework for realisation of SDGs in shared basins.

Climate change resilience in transboundary basins and raising the profile of water at coming COP21 negotiations formed another set of important issues discussed at the World Water Week. Junaid Kamal Ahmad, Senior Director of Water Global Practice at The World Bank Group said that this is a historic opportunity for two reasons: first the SDGs are being announced in September in New York, which are transforming the objective of development completely from output to sustainable outcomes; and second, in December comes the COP21 which will look at climate change and sustainability. He added that we would like to see a political statement at COP21 that water is back on the table that it is essential in a world of climate change and that we are able to move forward in the implementation of the SDGs in a concrete manner that delivers on the promise of water and adaptation. Emphasizing the importance of climate resilience in transboundary basins, Ahmad also stated that variability of water in these basins will be a huge issue under climate change. The World Bank Group also facilitated a high level panel on water in COP21. The panel comprised of several distinguished speakers namely President of the Marshall Islands; Minister for Water Resources and Sanitation from Senegal; Minister of Water and Irrigation from Jordan; Minister of Water and Sanitation from South Africa; and Special Envoy for Water from the Netherlands. In his keynote, President of the World Water Council, Ben Braga, stated that the impacts of the climate change are manifested through, by and with water: sea level rise, floods, droughts, storm surge and tsunami all are water related. In her video message, the Minister of Ecology, Sustainable Development and Energy and the host of COP21, Ségolène Royal, stated that “water and climate are one and the same debate” further raising the commitment to take water agenda prominently in the COP21 negotiations.

While outcomes from this World Water Week may take time and may occur indirectly, narratives supporting cooperative water management and strong inclusion of water in the upcoming COP21 have already appeared in the press as water practitioners, politicians and opinion makers from around the world  registered their collective voices for a more sustainable and water-cooperative-world.

Tahira Syed is a Interdisciplinary Doctorate Candidate with Water Diplomacy Program at Tufts University. Her research focuses on transboundary water governance and transboundary relations in the Greater Himalayan region.