This article is the first installment of the series Water Diplomacy: Issues of Complexity Science and Negotiation Theory

Farmers in California’s Central Valley prominently display signs along the highway reading “Congress created this dustbowl,” while, in Los Angeles, the water conservation mascot “Lawn Dude”, prominently displayed on billboards in and around the city, reminds residents to stick within regulated limits for watering their lawns. Though the drought itself is not record-breaking, a combination of severe groundwater depletion, water shortages along the Colorado River, and rising heat (and thus evaporation) have created a critical water supply problem for the state.

Multiple analyses of the problem have made demons and victims out of various sectors and stakeholders. However, complex relationships among contributors to the problem make it impractical to assign blame or attempt to find full resolution in a single sector. Conventional solutions that seek to “optimize” water use (in terms of dollars of value, pollution factor, or food calories grown per dollar, for example) lead to reductive analyses that ignore the interrelationships and second- and third-order benefits—and costs—of water uses and proposed solutions. Some outside parties have suggested that this is just a storage issue: more dams and reservoirs would solve the problems exacerbated by drought. These limited opinions highlight that while many in California see the complex interactions and connections between the interests of domestic, industrial, agricultural, and natural systems stakeholders, there are those who hold a singular perspective on the cause and solution to the current water shortage. 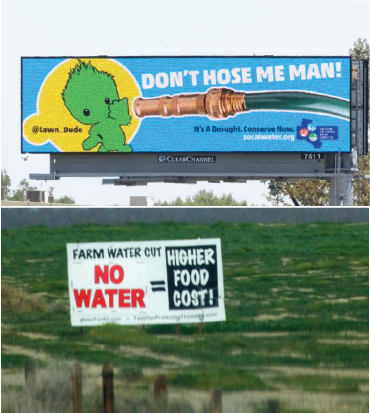 In the cities and suburbs of Southern California, @Lawn_Dude’s billboards instruct homeowners to cut back their water use. On Interstate 5 in the rural Central region, signs such as these are placed on farms along the highway.

A networked view of the system surrounding water in California is necessary to both understand and prescribe how decisions about sharing water are made, what criteria are considered in those decisions, and who does the deciding. Issues intertwine to create the California water problem, but the interconnections also contribute to opportunities for addressing the complex water challenges, especially regarding agriculture, which is by far the state’s largest water consumer. A more comprehensive perspective that relates analysis of agricultural water use to other analytic and issue lenses leads to improved understanding and decision-making around water policy broadly.

With 95-100% of California in “severe drought” or worse over the course of the past year, the state has begun to take more drastic steps to respond to the crisis. Recently, even some of the most senior rights holders have had their usage curtailed—though still getting 65-75% of their allotted flows puts them in a much better position than many junior holders who are not allotted any water at all. In September 2014, Governor Jerry Brown signed long-awaited rules restricting previously unregulated draws from groundwater in the state into law. Groundwater, perhaps the most tragic of the “commons” of water resource management, is hard to measure in part because it is not contained by property lines. In the absence of regulation, users therefore have little incentive to conserve it as long as their neighbors continue to deplete reserves.

The measures taken so far are not nearly sufficient to fix California’s water problem. The loosely tracked nature of water use in the state continues to pose obstacles to creating better accountability. For example, recent groundwater regulations allow continued confidentiality for rates of groundwater pumping and the users behind them. One of the bill’s authors, Assemblyman Roger Dickenson, reportedly said that “In essence, this was a battle we didn’t think we could take on, so we agreed to keep the confidentiality.” Additionally, groundwater management agencies are not required to develop sustainability plans until 2020, and high- and medium-priority groundwater basins are not expected to achieve sustainability until 2040, under the current plan. Local and state governments have invested considerable effort to reduce residential and urban water use by 25% or more immediately. However, even deep cuts in this area may not have much of an impact, since generous estimates put residential use at only about 14% of the total human use of water in the state.

Though there has been some pushback against politically unpalatable residential water use restrictions, agriculture has also been asked to make substantial cuts. However, efforts at actual reform of the agriculture industry’s water use have been largely absent from recent responses to the crisis. Agriculture has been the focus of much criticism for its economic and ecological contributions to the state’s water crisis. Critics highlight that agriculture claims 80% of the state’s water use, while accounting for only two percent of the state’s GDP. Charges include that “Big Ag” senior water rights holders have no incentive not to waste water; they are the last to have their water rights restricted, insulating them against the risks of drought. In some cases they benefit from water shortages because of their ability to sell water at a premium. Farmers have also come under fire for cultivating water intensive crops—including the infamous almond—in a natural desert that requires extensive irrigation, and consumers have even been called upon to minimize consumption of thirsty crops.

However, these criticisms only represent part of the story of how and why agriculture and other water users exceed capacity. In some cases, “Use-it-or-lose-it” provisions in water rights mean that rights holders can essentially be penalized for conserving water by having their allotments reduced, creating an incentive for them to use more than they need. Some riparian sources have restrictions on them preventing water from being sold to other users. In other cases, up to 20% of users’ allocated water may be sold, but technical and logistical hurdles make its sale impractical. In both cases, the prevailing incentives create obstacles to water flowing to where it could be used more effectively.

From an ecological perspective, options for conserving or selling excess water aren’t straightforward either: Adopting more water-efficient agricultural practices (while a good idea in and of itself) and then selling the water savings to other users may not be an option. Flood irrigation removes much more water than an efficient drip system does, but it also returns more of the flow to recharge the aquifer. Selling off the “savings” from a drip system would actually deprive downstream riparians of flows that a flood irrigation system would provide. “Inefficient” flood irrigation can serve the ecosystem in ways that a strict agricultural or economic analysis of efficiency would not see.

Digging deeper into criticisms about resource efficiency also reveals complexities in the ecology and economy of various crops. For example, while the almond crop appears “expensive” at about one gallon per nut, comprising 10% of water consumption overall, nuts and fruits are in fact the only agricultural products that account for a higher percentage of total agricultural revenues than they cost as a proportion of water in agricultural use – 45% and 35% respectively. Taken in context, these crops may in fact be a better option in California’s thirsty fields.

This more nuanced portrait shows agriculture’s responsibility for the water crisis to be mixed. However, since agricultural use accounts for such a large portion of total human use of water in the state, it would seem that solving the problems with agricultural use of water would address most of the state’s water problem overall. Resolving the water crisis will require a substantial shift in agriculture’s orientation towards water, but as the interconnected influences discussed above make clear, this complex water problem cannot be treated as simply an agriculture problem.

The economic, ecological, and socio-political challenges posed above need to be “unpacked” and the connections among the domains need to be accounted for in the policy response to the problem. An analysis of the interconnected and interdependent nature of the issues that comprise California’s water problem can demonstrate the pitfalls of one-track solutions, but ideally it can also point the way to more comprehensive—and even elegant—“mutual gains” outcomes. Such solutions might reflect some of the following recommendations: