Planning for water or for development? Hydro-centric or hydro-supportive approaches to food, energy and water security

Water resources have the potential to contribute to sustainable social and economic development. However, water boundaries (rivers and their basins) don’t align with political geography. To address a development problem that involves water, where should institutional boundaries lie? Which parties are the “right” parties for addressing a particular challenge?

A hydro-supportive approach that gets the geography of a specific development opportunity or problem right. It respects political boundaries and the development planning within them and includes different user sectors. It assists with coordination between the involved parties and most importantly, considers how water and its management can contribute to addressing the problem. The alternative, hydro-centric, approach starts with the water resource and seeks to direct its use often with a priority to water-related goals.

Here are three examples from Southern Africa. One illustrates how hydro-supportive approaches could provide water security while two are examples where hydro-centric approaches weakened food and energy security.

The Lesotho Highlands Project is the largest water transfer project in Africa. The partnership transfers water from Lesotho and South Africa and produces hydropower using a series of dams and tunnels. While the project was initiated in the 1980s, only the first phase is complete. Studies in the early 2000s lead to several project modifications being suggested in 2007 which have altered implementation plans for phase II and III.

Benefits from the project to Lesotho include the payments made to Lesotho for the use of its territory to store and transfer the water that would eventually flow into South Africa’s Eastern Cape Province to the economic heartland around its Gauteng province instead. Lesotho also benefits from the built infrastructure, including roads and power transmission lines that were built as part of the project. South Africa primarily benefits from a reduction in cost of the water transferred through the project to meet domestic, agricultural and industrial needs in Gauteng Province and to manage salinity in the Vaal River. These cost savings are shared as benefits between South Africa and Lesotho and contribute substantially to the Lesotho Government’s budget.

While not all aspects of the project have been positive – there has been active and ongoing criticism of the scheme, including that the distribution of the benefits between people of Lesotho have been unfair and that some were not adequately compensated for arable land that was lost. Other concerns about the loss of environmental resources were less serious than expected and it was found that some resources, for instance firewood, actually increased.

A corruption scandal involving multiple firms and individuals associated with the project took center stage between 1999 and 2004 and saw a number of North American and European companies disbarred from future work with the World Bank while some Basotho officials were jailed. Phase 1B of the project was modified to take account of the environmental and social impacts identified during Phase 1A of the project and was completed on time and on budget while Phase 2 is currently under preparation.

Water Security: just one benefit within the Lesotho Highlands Project

The main purpose of this ongoing project is to provide water security for the South Africa’s economic heartland while supporting economic development in Lesotho. The project diverts the water that would eventually flow into South Africa into another tributary from where it can more easily be accessed without energy intensive pumping. Water security to support social and economic development is the primary motivator for South Africa and Lesotho shares the financial benefits while also generating hydropower for local needs.

Planning for this project was driven by user sectors and coordinated bilaterally. It was not organized as a river basin project although other riparian states were consulted.

Katse Dam, built during phase I of the Lesotho Highlands Project (Wikimedia Commons/woertz) 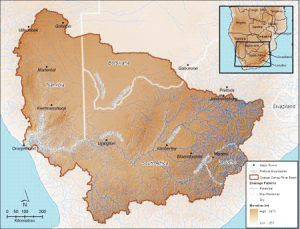 Abundant precipitation in the highlands of Lesotho provide significant inflow to the Orange-Senqu river system (ORASECOM).

Food Security, viewed as a water issue vs. a multi-sector development planning problem

As a landlocked and primarily agricultural country, Malawi sees the Zambezi and its major tributary, the Shire, as a means of transport. But navigation is difficult, expensive to sustain and controversial. Mozambique’s transport policy has been to build a railway that would open up large areas of its northern provinces for food production as well as providing an outlet for its mines. Although Malawi will also benefit from this railway, their preference for river navigation saw them developing an inland port on the Shire tributary at Nsanje without Mozambique’s agreement, leading to an embarrassing standoff – and a “white elephant” construction.

Although discussions had been going on for over a decade about water management issues, they had focused on environmental issues and the establishment of a joint river basin institution involving all riparian states. This hydro-centric approach, which failed to appreciate Mozambique’s development goal of supporting its food production, led to conflict and a waste of scarce development resources by Malawi.

Addressing the needs and concerns of both countries was a multi-sector development-planning problem – not just a water issue.

The Zambezi basin is the largest trans-boundary basin within the Southern African Development Community (SADC) region and is shared by 8 riparian states (Angola, Botswana, Malawi, Mozambique, Namibia, Tanzania, Zambia and Zimbabwe). The climate varies in the basin with some riparians receiving more than 500 mm of rainfall each year and others experiencing more arid conditions (less than 100 mm per year) during highly seasonal rain events. So far there has been limited development of the large potential for hydropower production and a very small proportion of the river’s water is used.

Hydropower projects developed by colonial regimes in the mid-20th century were built with limited coordination and impacts from these dams included altered flood regimes downstream. Efforts beginning in the 1980s to better coordinate and improve cooperation in the basin eventually lead to the initial formation of the interim Zambezi Watercourse Commission (ZAMCOM) in 2004. Among the many goals for ZAMCOM was to establish an overarching institutional framework for the management and development of the basin that could support equitable and sustainable utilization. However, the 2004 agreement was not enacted until 2011 (ratified by 6 of the 8 member-states) and a permanent secretariat was only established in 2014.

Energy-Security: failure to utilize hydropower in the Zambezi

Since 1980, the political objective of Southern African countries has been to develop the Zambezi’s substantial hydropower capacity. However, once again, the hydro-centric focus on setting up river basin institutions and protecting the aquatic environment saw infrastructure development neglected. The failure of consultation between the water and energy sectors and subsequent failure to develop hydropower projects contributed to serious energy shortages in the region which undermined social and economic development. This failure has also undermined trust in institutions for regional cooperation and resulted in the development of coal fired power stations that add unnecessarily to the region’s CO2 emissions.

River basin organizations can support decisions using information, providing options, and facilitating engagement, but river basins are seldom the locus of development decision making. Taking a hydro-centric approach to development plans is not helpful to meeting social and economic needs, as these plans must be made and implemented within political geographies not basins. At the resource scale, water management is not in itself a development goal but a means facilitate development. Hydro-supportive approaches are likely to be more effective in this than hydro-centric approaches. Through their engagement with water user sectors, they achieve better integration between different users as well as water-related goals such as the sustenance of the aquatic environment, inform inter-sectoral and regional development planning and achieve better development outcomes.

Mike Muller recently presented a version of this at the 4th Nile Basin Development Forum in Nairobi Kenya. A pdf version of these slides is available  here.

Mike Muller is Commissioner of the National Planning Commission in South Africa. He is a professional engineer, public sector manager, and policy innovator. Muller was formerly Director-General at the Department of Water Affairs and Forestry in South Africa, where he led policy and legislative reform and transformative national water programmes.