In referring to transboundary waters – the idea of riparian relations is often seen as a complex set of actions that derive the conflictive and cooperative nature of transboundary water management issues. It may be good advice to move away from stringent theories and concepts of water resources management and instead look at the broader context. Keeping our assumptions in check may not be an easy thing to do, but let us try anyhow.

As a starting point, let me propose use of a few questions instead of assumption to frame the problem. For instance, it may be useful to ask; what is the link between water and security? Security for whom? Can transboundary waters play a role to really achieve some sort of resolution or even peace?

Taking a questions-driven frame of thinking rather than assumptions-driven, it can be argued that to understand water and security in any region, understanding the true nature of conflict and cooperation over transboundary waters is imperative. Equally useful would be creating a broad understanding of who are the decision makers and what kind of dialogue-frames do they bring when trying to think about transboundary waters. 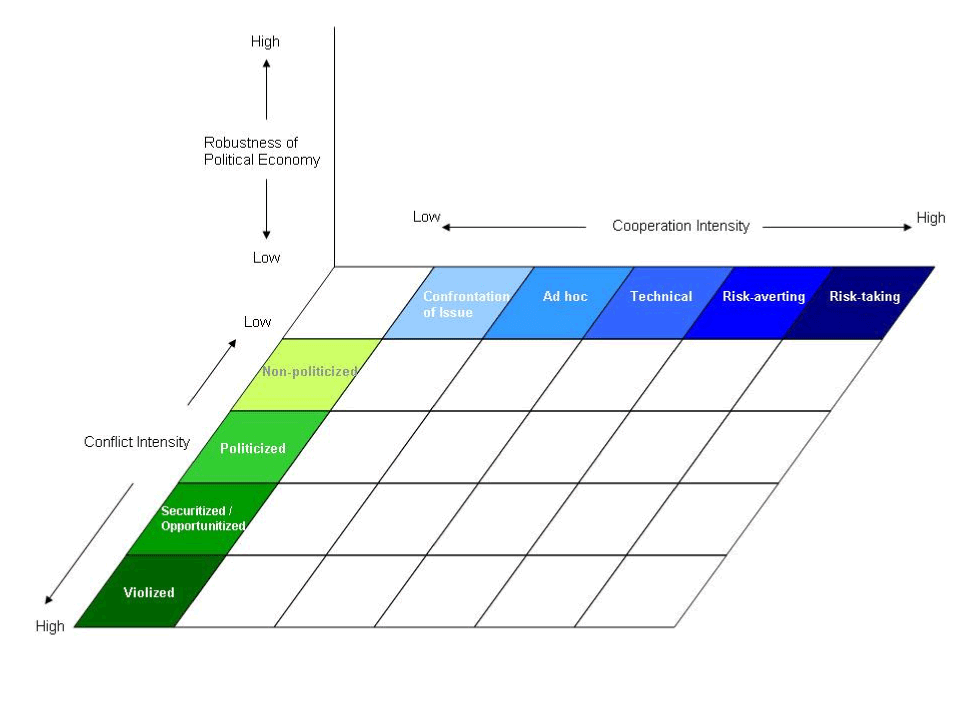 onflict and cooperation co-exist to make up the range of actions a state can take. The TWINS approach shows the trajectory of the riparian
relationship and basin development. (Mirumachi and Allan, 2007)

A set of power relations between riparians shape the transboundary waters, that in turn may also contribute towards coexisting conflict and cooperation over these very waters. Often cooperation is measured in terms of existence of river basin organization or in the form of multi-lateral agreements whereas these could in fact be a mere ‘smoke screen’ for the imbedded power politics that only depict national interests at play.

An example of this could be from the Mekong basin in South East Asia. The lower Mekong basin – Laos, Thailand, Cambodia and Vietnam – have had a long history of developing river basin organizations to plan and implement programs and projects for water resources use and development. It has been said that the Mekong countries are successful in developing the river basin organizations because of the ‘Mekong spirit’ based on the shared ‘good will’ between the countries despite the geo-political instabilities of the region and the political rivalries amongst the riparians. A closer look at the kind of decisions being taken and the kind of projects being implemented reveals intricate power relations at play that derive the ‘Mekong spirit’ in that national projects are done under the umbrella of river basin organizations. Similarly, the ‘Mekong spirit’ reflected through friendly cooperation while brought together the riparians to meet often and review technical feasibility studies to make decisions that are ‘collective’ in nature. However, the issues surrounding water allocation principles are neither defined nor put on the agenda of such meetings – making the idea of cooperation exuding from ‘Mekong spirit’ somewhat misleading.

In reiterating that cooperation and conflict coexist and that these shouldn’t be dichotomize or be understood as separate entities, a different way of analytical thinking about transboundary waters emerges. Naho Mirumachi terms this analytical thinking as Transboundary Water Interaction NexuS or TWINS. The TWINS is basically a visual representation in the form of a matrix that simultaneously shows how low conflict exists with high cooperation or high conflict exists alongside low cooperation. Essentially, the TWINS shows different combinations of how transboundary water interaction occurs between the spectrum of conflict and cooperation.

Some of the existing studies might show conflict and cooperation along a linear scale, e.g. NATO, BAR Scale, etc. With TWINS matrix, the underlying message is to move away from a normative idea that cooperation inherently leads to improved situation and having higher levels of cooperation the goals of sustainable development are better achieved – this may clearly not always be the case. Similarly, high conflict and low cooperation may not necessarily result in a totally disruptive and destructive process either – rather it could reflect a situation in which issues about water allocation for instance are put on the table to propel differing perspectives on how the problem is recognized. In essence, TWINS attempts to help move away from a normative understanding about how good cooperation is and how bad conflict is seen to be. It is a different way to reinterpret the ways in which transboundary basin level interactions are observed.

TWINS is not a predictive tool in any way, rather it only offers to help understanding how power relations emerge and how these relations are shaped by showing the shift in conflict and cooperation intensities over time. TWINS tries to paint the bigger picture of transboundary interactions where factors relating to water resources demands, factor relating to water-food-energy linkages might start becoming easier to underpin.

Tahira Syed is a Interdisciplinary Doctorate Candidate with Water Diplomacy Program at Tufts University. Her research focuses on transboundary water governance and transboundary relations in the Greater Himalayan region.