World Water Day reminds us of the very contemporary challenges facing many of our freshwater bodies. This year, World Water Day focuses on the link between water and sustainable development, and it offers a useful opportunity to consider in depth the politics surrounding water abstraction, allocation, access and use, particularly in developing country contexts. While there is little credibility to sensationalist views on water wars occurring between states, international transboundary river basins do shed light on some of the most contentious and intractable issues of water sharing. The Nile River basin is a good example, where the construction of the Grand Ethiopian Renaissance Dam symbolises Ethiopia’s ambition to utilise water resources for energy production and to mark economic development. However, this may seriously affect the existing status quo of water allocations downstream: the Egyptian prime minister stated the dam project as threatening the security of its nation.

The controversy of the dam on the Blue Nile represents the complex and multiple drivers of river basin development. In any river basin, there are competing demands: water for energy and agriculture; water for growing population and rapid urbanisation; water to maintain and improve both human and ecosystem health. In my recent book, Transboundary Water Politics in the Developing World, I argue that we need to consider the political economy of transboundary water resources, rather than viewing basins as objects of interstate conflict or cooperation. The key to understanding transboundary water politics is to unpack the ways in which the river basin is valued for what purposes, how institutions are established to govern allocation between states and between competing uses, who is involved in the decision-making and who is excluded. Typologies of the Nile as a conflictual basin or the Mekong River basin as a cooperative one paint over the ever-evolving deliberation and contestation of river basin development by various stakeholders at multiple spatial scales. Thus, solely looking at the number of international agreements or investigating when multilateral river basin organisations are set up may not be enough to give a bigger picture of the political economy of transboundary water resources. 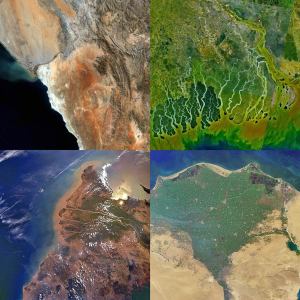 Typologies of a basin as “conflictual” or “cooperative” paint over the ever-evolving deliberation and contestation of river basin development by various stakeholders at multiple spatial scales. (NASA imagery of river basin mouths. clockwise from top-left: Orange, Ganges, Mekong, Nile)

Conflict and cooperation over transboundary water resources are not mere representations of failed or successful negotiation outcomes between states. Focusing instead on transboundary water interactions between states highlights that conflict and cooperation coexist, with their intensities changing over time. At the same time, this approach calls attention to how state agency operates in determining river basin planning and infrastructure development. The Transboundary Waters Interaction NexuS (TWINS) approach that I put forth in my book highlights how and why coexisting conflict and cooperation change over time. One of the main insights from applying the TWINS approach to the Ganges, Orange-Senqu and Mekong river basins is that we need to understand how power asymmetry works, both in material and discursive ways. Power asymmetries manifest not only in infrastructure construction at the detriment of other states’ water use but also in the way problems are discursively framed: an ‘unharnessed’ river short of realising its economic potential; shared water resources as a catalyst for sustainable development or regional integration. Such problem framing is often done by elite decision-makers who favour technical, modernist, hydraulic mission-style solutions that involve costly large-scale infrastructure. Notions of ‘benefit’ and ‘development’ are narrowly defined. These problem frames have a tendency to be dominant over other rationalities or world views on the role the river and river basin play in society, constraining governance. The findings probe issues of equity, not just in terms of quantitative water allocation between states but also regarding the long-term implications on society and the natural environment from these hard-to-undo choices of river basin development. The ways in which water resources are abstracted, transferred and utilised ultimately reflect a very political and entrenched landscape of power and vested interests.

Dr. Naho Mirumachi is Lecturer in Geography at the Department of Geography, King’s College London. Her book, Transboundary Water Politics in the Developing World, was published March 2015.